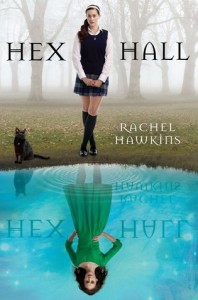 Three years ago, Sophie Mercer discovered that she was a witch. It’s gotten her into a few scrapes. Her non-gifted mother has been as supportive as possible, consulting Sophie’s estranged father–an elusive European warlock–only when necessary. But when Sophie attracts too much human attention for a prom-night spell gone horribly wrong, it’s her dad who decides her punishment: exile to Hex Hall, an isolated reform school for wayward Prodigium, a.k.a. witches, faeries, and shapeshifters. By the end of her first day among fellow freak-teens, Sophie has quite a scorecard: three powerful enemies who look like supermodels, a futile crush on a gorgeous warlock, a creepy tagalong ghost, and a new roommate who happens to be the most hated person and only vampire on campus. Worse, Sophie soon learns that a mysterious predator has been attacking students, and her only friend is the number-one suspect.
As a series of blood-curdling mysteries starts to converge, Sophie prepares for the biggest threat of all: an ancient secret society determined to destroy all Prodigium, especially her.

Rachel Hawkins is a high school English teacher. She lives with her family in Alabama, and is currently at work on the next book in the Hex Hall series.

MY THOUGHTS
Check out my rating of this book HERE

I have had this book sitting in a pile since it first came out and now I am wondering why it took me so long to read this.  It has all of the ingredients to make this one of my favorite books: snappy dialogue, snarky humor, and fast action.  This is a quick and easy read which I found immensely enjoyable.  Now, I just can’t wait for Demonglass.  The end of the story left me with so many questions.

Sophie learns that she has been classified as a dark witch when she checks into her new school, Hecate Hall.  She ends up at this reform school after several of her spells go horribly wrong.  She finds more outcasts her that are like her, but not really like her.  She has her first head over heels crush on the wrong boy, the REALLY wrong boy named Archer Cross.  At least she does make one friend, a vamp named Jenna. These two will probably play an even more important role in the next book.  My fingers are crossed on that one.

Like most young adult books, the parents are non existent, but even more so in this one since Sophie has never even met her father.  I did expect him to make a grand entrance like Darth Vader, “Sophie, I am your father!”, but that didn’t really happen.  Again, I have high hopes for the next installment.  I am not going into the plot twists, but just be sure that there are a few that will have you pleasantly surprised.

Recommended:  To Everyone over 13 since there are a few sexual references.
Similar Authors: Lauren Kate, Marlene Perez