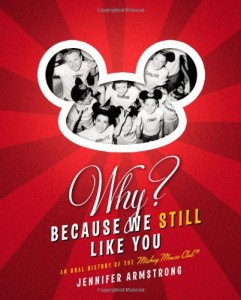 This book will tell the behind-the-scenes story of how The Mickey Mouse Club paved the way for all that came after, from its humble beginnings as a marketing ploy, through its short but mesmerizing run, to the numerous resurrections that made it one of television’s first true cult hits–all through the recollections of those regular kids-turned-stars who made it a phenomenon. It will reveal, for the first time ever, the untold stories of Annette, Darlene, Cubby and Karen, Bobbie and the rest of the beloved cast. It will explore, through the reminiscences of former fans who grew up to be some of television’s finest minds, what made the show so special. And it will examine why the formula the creators of the show invented is more relevant than ever, and whether we’ll ever see yet another Club for a new generation.

Jennifer Armstrong is a feature writer for Entertainment Weekly. She has provided pop culture commentary for CNN, VH1, Fox News Channel, and ABC, and her writing has been featured in Salon, MTV.com, Glamour, Budget Travel, and the Chicago Sun-Times. She also co-founded and continues to run SirensMag.com, an alternative online women’s magazine. Her essays have appeared in the anthologies Altared: Bridezillas, Bewilderment, Big Love, Breakups, What Women Really Think About Contemporary Weddings, and Coffee at Luke’s: An Unauthorized Gilmore Girls Gabfest.

This wonderful collection of stories from the original Mouseketeers gives you behind the scenes details and insights.  These were the original child stars when television was a new medium and the regulations were probably more strict than today.  Though there are tales of underage drinking and shy kisses, I don’t think these kids were as wild as today’s children stars.  I watched the reruns of the shows since I had older brothers and a sister.  We went to Disneyland regularly and were very much in tune with that culture.

This isn’t a full historical account of the Micky Mouse Show, but more of  recollections that probably couldn’t have been told before.  The updates of each member towards the end of the book is really enlightening.  These people had the best and worst of show business.  Overall it is just a nice book to quickly read.