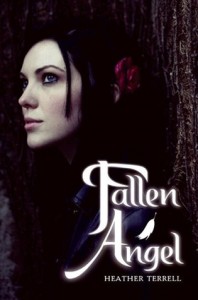 The first book in a dark, edgy new angel series about a girl who finds herself forced to choose sides in the battle between fallen angels, even if that means going against the boy she loves.

When Ellie Faneuil first sees Michael Chase she feels an instantaneous connection. But she does not realize how much they have in common, including the ability fly and to see what others are thinking – not to mention a taste for blood. Reveling in their new powers and their growing feelings for each other, Ellie and Michael are determined to uncover what they are, and how they got this way … together.
But the truth has repercussions neither could have imagined. Soon they find themselves center stage in an ancient conflict between fallen angels that threatens to destroy everything they love. And it is no longer clear whether Ellie and Michael will choose the same side.

In this electrifying novel Heather Terrell spins a gripping tale of soul-mates, supernatural powers and a truth that will change Ellie and Michael‘s world forever.

Heather is the author of The Chrysalis and The Map Thief, which will appear in more than ten countries, as well as Brigid of Kildare.

SOURCE:  Around the World ARC Tours

LOVED IT
I have enjoyed Heather Terrell’s other books, The Chrysalis

and The Map Thief

.  She brings her same writing skills to this new young adult series. The book weaves romance and mystery together with a nice angelic twist.  The angel theme seems to have really taken off lately.  The writing in this one does elevate it above the crush of similar titles.
The story is definitely a set up for a series since you get lots of background on Ellie and a little bit on Michael, her romantic interest.  Ellie is brought up to be completely clueless about her heredity and genealogy.  Her guardians try to bring her up to be “good” and put great restrictions on her which she just accepts.  I had the most difficulty accepting that one, that a teen would not try to rebel in the tiniest bit.  She does start to rebel once she meets Michael.   Michael is brought up the same way by his guardians and when he discovers he shares the same paranormal traits of flying and mind reading as Ellie, they connect and try to figure out what else they can do. Then all hell breaks loose.  Ellie’s father gives them several clues as to her purpose and with a little luck and research, she figures it out.
Of course, there has to be an evil element to foil all of the goodness.  There are several “bad” angels who battle with Ellie and I am sure that their story will be even more intense in the next installment.  One minor character that really stood out is Ruth, Ellie’s mousy best friend.  I can see her becoming a bigger part of the tale in the future.  Overall, I really enjoyed this one.  I would recommend it for even younger teens since there is not much more that kissing.