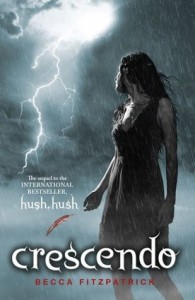 The sequel to the New York Times Best selling phenomenon, Hush, Hush! Nora should have know her life was far from perfect. Despite starting a relationship with her guardian angel, Patch (who, title aside, can be described anything but angelic), and surviving an attempt on her life, things are not looking up. Patch is starting to pull away and Nora can’t figure out if it’s for her best interest or if his interest has shifted to her arch-enemy Marcie Millar. Not to mention that Nora is haunted by images of her father and she becomes obsessed with finding out what really happened to him that night he left for Portland and never came home.
The farther Nora delves into the mystery of her father’s death, the more she comes to question if her Nephilim blood line has something to do with it as well as why she seems to be in danger more than the average girl. Since Patch isn’t answering her questions and seems to be standing in her way, she has to start finding the answers on her own. Relying too heavily on the fact that she has a guardian angel puts Nora at risk again and again. But can she really count on Patch or is he hiding secrets darker than she can even imagine?

Becca Fitzpatrick’s first book, Hush, Hush debuted as a New York Times bestseller. She graduated college with a degree in health, which she promptly abandoned for storytelling. When not writing, she’s most likely running, prowling sales racks for shoes or watching crime drams on TV. She lives in Colorado. Find out more at beccafitzpatrick.com.

MY THOUGHTS:
ABSOLUTELY ADORED IT

I was one of those people who was dismayed when Hush, Hush ended, I liked it that much, so I was thrilled that I heard word around the internet that the story would continue.  I was even more thrilled to read Crescendo. Crescendo picks up where Hush,Hush ended and even though that leaves Patch and Nora together, they are soon separated.  Nora’s quest for information about her life and the fact surrounded her father’s death leads her to become friendly with Rixson.  Rixson does give Nora a few answers, but she will have to continue the search on her own.  So yes, you will have to get the next book in the series, Tempest.

There, did I give anything away?  I hope not.  Overall, I liked this book even better than the first one.  The dialog was even snappier and the personalities of Nora and Patch were better fulfilled.  Marice is the sparkling evil foil to Nora’s goodness and their interactions really create a lot of depth in the story.  There is some underage drinking, again nothing worse that you might see on television.  I think this book is best suited to teens older than 13.  Everyone should enjoy this one.