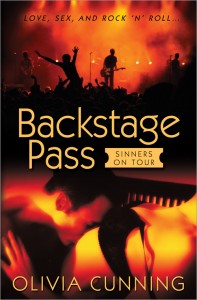 Olivia Cunning 20 Questions; Author of Backstage Pass
ROCKTOBER on Book Hounds; October 1, 2010
1. Sex, Drugs or Rock and Roll? Pick one.
OC: Just one? That’s an impossible decision. Well, if I must, I guess I’ll take the guys with guitars, for more than one of those choices, but I say NO to drugs!
2. My book should be read while drinking a glass of …
OC: cold, cold ice water. You’ll need it to cool off.
3. My book is best read while listening to ….
OC: the sound of your elevated heart rate. Or Pantera’s Cowboys from Hell.
4. The stories in my book are inspired by real or imagined events?
OC: Mostly imagined, but some real events have inspired portions. The concert scenes are a mix of things I’ve seen at shows, watched on videos, and imagined. Sinners style of music is a mix of my favorite bands and the bands I wish existed. The personalities of the characters and their actions are entirely fabricated, but their looks are a blend of various hotties and my imagination. Occasionally, I twist outlandish gossip I’ve heard about rock stars into plot points. It amuses me. The sex scenes? Erm…no comment.
5. My personal theme song is…
OC: “To Be Loved” by Papa Roach
6. If I were a rock star, I would be …
OC: Very rich! 🙂 Or Keith Richards. I’m convinced that man in immortal. What is he, like, 180 years old? Only 66, you say. Perhaps I should rethink this.
7. Do you play an instrument?
OC: I’m an accomplished flutist and a lousy, lousy, wannabe guitarist. Actually, I have no right to call myself a guitarist. I hold the guitar and it makes noises when I touch the strings. Horrible, tortured noises. Poor guitar.
8. Favorite band member (lead singer, drummer, …)?
OC: I once had a thing for bassists (I lost my voice at a Whitesnake concert as a teenager because I was screaming so loud for Rudy Sarzo), but have matured to scream for lead guitarists. Mostly.
9. Favorite road food?
OC: Possums. Oh, you asked about road food, not road kill. Hmm… I’ve never tasted possum, so I’ll go with peanut M&Ms.
10. I can’t live without…
OC: My laptop computer.
11. Most embarrassing song on my iPod is ….
OC: “Master Exploder” by Tenacious D. I admittedly have more embarrassing songs on CD, but did not upload them to my iPod, so am happy I don’t have to reveal them.
12. If I could do one thing like a rock star, I would…
OC: Play guitar solos wicked awesome.
13. E-books: Friend or foe?
OC: Friend, though I don’t own an e-reader.
14. Book marks or dog ears?
OC: Improvised bookmarks. I’ve been using a redeemed, iPod gift card as a bookmark for months. I don’t want to throw it away. It’s shiny! I mean, it was a “reduce, reuse, recycle” thing.
15. What book would you most like to see made into a movie?
OC: I have to say Backstage Pass, obviously. They would have to tone down the sex scenes for general audiences, but the scenes where the band members interact with each other would be hilarious on film. And I love when the heroine, Myrna, bosses those famous, cocky rock stars around and they fall all over themselves to please her. Fun times!
16. What is next for you as an author?
OC: The second book in the five-book Sinners on Tour series, Rock Hard, will be released in April 2011. It features Sinners’ lead singer, Sed Lionheart. YUMMY!
17. Do you have a favorite place to write?
OC: In my massaging recliner with my laptop. My desk is merely for show and collecting junk mail.
18. Are you reading anything good right now?
OC: I just started reading the fourth book in the Percy Jackson series, The Battle of the Labyrinth. What can I say? I have eclectic tastes in reading material.
19. What is the last thing you Googled?
OC: Astrological signs for my characters. I had to pick out birthdays for the bios on Sinners’ website (www.sinnersontour.com) and wanted the guys’ astrological signs to match their personalities. How lame is that? If you’re wondering, Brian Sinclair, the lead character of Backstage Pass, is on the Pisces/Aquarius cusp.
20. What makes you cringe?
OC: Skateboarding accidents. OUCH! 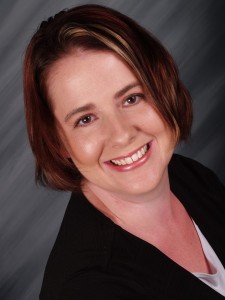 BACKSTAGE PASS BY OLIVIA CUNNING—IN STORES OCTOBER 2010
Five stunning guys, one hot woman, and a feverish romance…
For him, life is all music and no play…
When Brian Sinclair, lead songwriter and guitarist of the hottest metal band on the scene, loses his creative spark, it will take nights of downright sinful passion to release his pent-up genius…
She’s the one to call the tune…
When sexy psychologist Myrna Evans goes on tour with the Sinners, every boy in the band tries to seduce her. But Brian is the only one she wants to get her hands on…
Then the two lovers’ wildly shocking behavior sparks the whole band to new heights of glory…and sin…
ABOUT THE AUTHOR
Raised on hard rock music, award-winning author Olivia Cunning has been known to travel over a thousand miles to see a favorite band in concert. She discovered her second love, steamy romance novels, as a teen—first, voraciously reading them and then penning her own. She lives in Hastings, Nebraska. For more information, please visit http://www.oliviacunning.com/

SPECIAL THANKS TO OLIVIA FOR STOPPING BY TO PLAY 20 QUESTIONS….