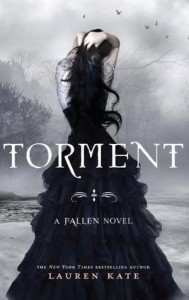 That’s what it’s like for Luce to be apart from her fallen angel boyfriend, Daniel.
It took them an eternity to find one another, but now he has told her he must go away. Just long enough to hunt down the Outcasts—immortals who want to kill Luce. Daniel hides Luce at Shoreline, a school on the rocky California coast with unusually gifted students: Nephilim, the offspring of fallen angels and humans.

At Shoreline, Luce learns what the Shadows are, and how she can use them as windows to her previous lives. Yet the more Luce learns, the more she suspects that Daniel hasn’t told her everything. He’s hiding something—something dangerous.
What if Daniel’s version of the past isn’t actually true? What if Luce is really meant to be with someone else?

The second novel in the addictive FALLEN series . . . where love never dies.

Lauren Kate grew up in Dallas, went to school in Atlanta, and started writing in New York. She is the author of The Betrayal of Natalie Hargrove and now lives in Los Angeles.

This is the second in the Fallen series and I adored it as much as the first one.  The story delves more into Luce’s past and gives you a little more background on the Outcasts, Demons and Fallen Angels.  This is in a way a political thriller since the story shows the interesting dynamic between the three groups. You find out that the Demons and Fallen Angels have more in common than you might think.  The Outcasts want to use Luce to get back into Heaven and all Luce is having none of it.  In fact Luce is upset at Daniel since he won’t spill the details of their past together and constantly leaves her in the dark.  I sincerely hope that this is resolved by the conclusion of the series.  I am really ticked off at Daniel and I hope that his secrecy is explained in the next book.

All of the forces of good and evil are in play, but you might be surprised at who is on which side.  Luce is moved to a new school where she learns she has more power than imagined and a lot of her skills come from past lives.  There are a few new characters introduced and I am sure you will enjoy them as much as I did since it also leaves open a chance for the author to continue the story in another direction.  There is another cliff hanger at the end and you will have to wait until Summer, 2011 to get the next installment.