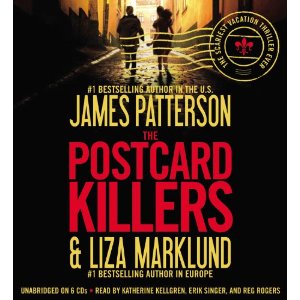 NYPD detective Jack Kanon is on a tour of Europe’s most gorgeous cities. But the sights aren’t what draw him–he sees each museum, each cathedral, and each restaurant through a killer’s eyes.

Kanon’s daughter, Kimmy, and her boyfriend were murdered while on vacation in Rome. Since then, young couples in Paris, Copenhagen, Frankfurt, and Stockholm have become victims of the same sadistic killers. Now Kanon teams up with the Swedish reporter, Dessie Larsson. Every killing is preceded by a postcard to the local newspaper–and Kanon and Larsson think they know where the next victims will be. With relentless logic and unstoppable action, THE POSTCARD KILLERS may be James Patterson’s most vivid and compelling thriller yet.

James Patterson has had more New York Times bestsellers than any other writer, ever, according to Guinness World Records. Since his first novel won the Edgar Award in 1976, James Patterson’s books have sold more than 170 million copies. He is the author of the Alex Cross novels, the most popular detective series of the past twenty-five years, including Kiss the Girls and Along Came a Spider. Mr. Patterson also writes the bestselling Women’s Murder Club novels, set in San Francisco, and the top-selling New York detective series of all time, featuring Detective Michael Bennett. He writes full-time and lives in Florida with his family.

Liza Marklund is a Swedish journalist and author of the Annika Bengtzon series, which has sold 9 million copies in 30 languages. She lives in Sweden and Spain.

The first half of this story is fast paced and I didn’t want to turn it off, then it dragged me down.  I had to force myself to finish this one.  I can’t say this is one of the best James Patterson books I have ever read, but it is close.  You can guess that the serial killer on the loose makes his presence known by sending a postcard to the local press to announce the upcoming murder.  The story line is a very familiar Patterson theme, sex and murder.  This one was just “meh” for me.

Contest is open to anyone with a US or Canadian mailing address (no PO Boxes)
Winner will be chosen by Random.org on 10.12.10
Winner will have 48 hours to respond to email or a new winner will be chosen.
This giveaway is sponsored by Hatchette Book Group and 3 books will be available.
Only one winner per household address!