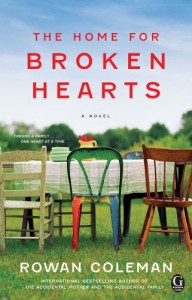 THE DOOR IS OPEN . . . For young widow Ellen Wood, her Victorian home is a refuge—a place to feel safe with her eleven-year-old son, Charlie. But when money grows so tight that Ellen could lose the house, her sister, Hannah, makes a radical suggestion . . . rent out some of the rooms. Soon Ellen has three lodgers: Sabine, a German coworker of Hannah’s, recently separated from her husband; Allegra, an eccentric but wise novelist; and Matt, an up-and-coming young journalist in search of his voice, who has just landed a plum job in London. Ellen thinks three strangers are the last complication she needs, but they make her realize just how isolated she has become. Their presence exposes a secret she’s been keeping hidden, as well as a conflict with her sister that is both shocking and revealing. And while a love affair with a younger man seems like a fantasy powered by her imagination, Ellen can’t deny her deep connection to Matt, or the changes he inspires in her and her relationship with Charlie. Outside her home’s sheltering walls lies a world of opportunity as well as danger. Now that she’s had the courage to open the door, does Ellen dare step through?Witty, moving, and deeply insightful, The Home for Broken Hearts celebrates everything that makes life worth living, from an author who knows just how to speak to the heart.

Rowan Coleman worked in bookselling and publishing for seven years, during which time she won the Company magazine Young Writer of the Year award. She lives in England, where she is working on her next novel.

This is such a thoughtful and heartwarming story about family and that you don’t always have to be blood relations in order to belong.  It starts out with Ellen and Charlie who have just lost their husband and father and follows Ellen through her recovery from the loss and Charlie growing up.  Ellen finds that when Nick died in a car accident that is his fault, it negates his life insurance and she is force to take on roommates.  The new roommates start to act as a family since they each have a need that one another fulfills.

All of the characters are well drawn and not cliched. Matt, the womanizer, although he doesn’t seem like he really enjoys it, has to play the part for his job becomes true to his heart.  Sabine, who takes the bad situation of her husband cheating on her and sees the humor in it.  Allegra, the romance writer, becomes the matriarch and gives Ellie the confidence boost she needs.  Yes, there are parts that were a little predictable, but the writing is so wonderful, it is an easy thing to overlook.  Any fan of British Chick Lit is going to adore this one.