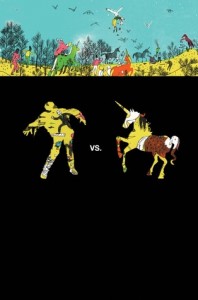 It’s a question as old as time itself: which is better, the zombie or the unicorn? In this anthology, edited by Holly Black and Justine Larbalestier (unicorn and zombie, respectively), strong arguments are made for both sides in the form of short stories. Half of the stories portray the strengths–for good and evil–of unicorns and half show the good (and really, really bad-ass) side of zombies. Contributors include many bestselling teen authors, including Cassandra Clare, Libba Bray, Maureen Johnson, Meg Cabot, Scott Westerfeld, and Margo Lanagan. This anthology will have everyone asking: Team Zombie or Team Unicorn?

Holly Black is the bestselling author of the Spiderwick series. Her first book, Tithe: A Modern Faerie Tale, was an ALA Top Ten Book for Teens, received starred reviews in Publishers Weekly and Kirkus Reviews, and has been translated into twelve languages. Her second teen novel, Valiant, was an ALA Best Book for Young Adults, a Locus Magazine Recommended Read, and a recipient of the Andre Norton Award from the Science Fiction and Fantasy Writers of America. Her third teen novel, Ironside, the sequel to Tithe, was a New York Times bestseller. Her new novel, White Cat, is coming Summer 2010. She lives in Amherst, Massachusetts. Visit Holly at www.blackholly.com.

Justine Larbalestier is the author of several teen novels, including LIAR, the MAGIC OR MADNESS trilogy, and HOW TO DITCH YOUR FAIRY.  She was born and raised in Sydney, Australia, and she and her husband, Scott Westerfeld, now split their time between Sydney and New York City. Visit Justine at justinelarbalestier.com.

I dreamed about this book.  Seriously, I imagined these stories told by these authors since a rainbow bright unicorn landed on my desk in the third grade.  So, I have tipped my hat and you now know which side of the fight I live for.  But wait!  The zombie people made really great arguments for the zombies. What this book really comes down to is:  Holly versus Justine.  I love them both separately but equally and for different reasons.  There are great back and forths between each story where Holly is pro Unicorn and Justine is pro Zombie.  I laughed until I almost choked, but then the zombies would win.

This is also the first anthology where I read each and every story.  In most books like this there are always a few that I just don’t like, but these are all spectacular.  They are also stories you could read over and over again.  My favorite has to be Meg Cabot’s story about a killer unicorn (literally can kill) that farts rainbows and jasmine.  Now who wouldn’t want one of those around?  I also enjoyed Scott Westerfield’s Zombie story for some weird reason, it just struck a chord with me in a post apocalyptic way.  (Trust me, I am NOT sucking up to Scott since his wife his co editor–the story still has me thinking about it.)

These are some pretty spooky stories that would be great around a campfire or under the covers with a flashlight.  They are all pretty safe for kids over 11 or so.  Although I think the kids will have a hard time prying it away from their parents.