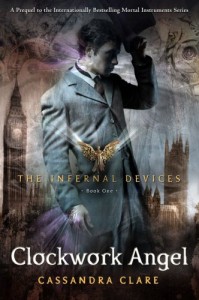 Magic is dangerous—but love is more dangerous still.
When sixteen-year-old Tessa Gray crosses the ocean to find her brother, her destination is England, the time is the reign of Queen Victoria, and something terrifying is waiting for her in London’s Downworld, where vampires, warlocks and other supernatural folk stalk the gaslit streets. Only the Shadowhunters, warriors dedicated to ridding the world of demons, keep order amidst the chaos.
Kidnapped by the mysterious Dark Sisters, members of a secret organization called The Pandemonium Club, Tessa soon learns that she herself is a Downworlder with a rare ability: the power to transform, at will, into another person. What’s more, the Magister, the shadowy figure who runs the Club, will stop at nothing to claim Tessa’s power for his own.
Friendless and hunted, Tessa takes refuge with the Shadowhunters of the London Institute, who swear to find her brother if she will use her power to help them. She soon finds herself fascinated by—and torn between—two best friends: James, whose fragile beauty hides a deadly secret, and blue-eyed Will, whose caustic wit and volatile moods keep everyone in his life at arm’s length . . . everyone, that is, but Tessa. As their search draws them deep into the heart of an arcane plot that threatens to destroy the Shadowhunters, Tessa realizes that she may need to choose between saving her brother and helping her new friends save the world. . . . and that love may be the most dangerous magic of all.

Cassandra Clare made her fiction debut with The Mortal Instruments series, which has been on many bestseller lists. Cassandra lives in an old Victorian house in western Massachusetts with her fiance, their cats, and lots and lots of books. Visit her website at CassandraClare.com. Learn more about The Mortal Instruments series at MortalInstruments.com. Learn about her new trilogy The Infernal Devices at TheInfernalDevices.com.

Cassandra Clare has to be one of my favorite authors now.   I loved the Mortal Instruments series and this one just adds to them.  This is one seriously creepy book and I fell in love with all of the characters. It is nice to see the Shadowhunters again.  There is a lot of excitement towards the end of the book which of course left me hanging. The story is about Tessa who is brought to England by her brother for nefarious reasons.  Tessa really grows once she escapes from the Dark Sisters and finds herself in the London Institute where she develops her new found powers of transformation.

So now we have Team Jem and Team Will.  I am still torn between the two and I think a sequel would help me decide.  Tessa grows into her own between these two boys and while the story goes back and forth between the two, Tess learns that her brother has abandon her and they are her salvation.  There is a bit of mystery that surrounds her parents and this is partially answered towards the end.  The other curious part of the book is the clockwork angel itself.  I think that there is more to tell about this piece of jewelery than is covered by the story so far.

I highly recommend this book for everyone, although there is some unsettling violence, so it is probably best suited for kids older than 12.