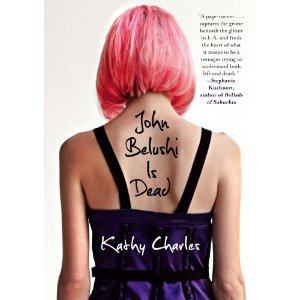 IN THE END WE ALL FADE TO BLACK. Pink-haired Hilda and oddball loner Benji are not your typical teenagers. Instead of going to parties or hanging out at the mall, they comb the city streets and suburban culs-de-sac of Los Angeles for sites of celebrity murder and suicide. Bound by their interest in the macabre, Hilda and Benji neglect their schoolwork and their social lives in favor of prowling the most notorious crime scenes in Hollywood history and collecting odd mementos of celebrity death.
Hilda and Benji’s morbid pastime takes an unexpected turn when they meet Hank, the elderly, reclusive tenant of a dilapidated Echo Park apartment where a silent movie star once stabbed himself to death with a pair of scissors. Hilda feels a strange connection with Hank and comes to care deeply for her paranoid new friend as they watch old movies together and chat the sweltering afternoons away. But when Hank’s downstairs neighbor Jake, a handsome screenwriter, inserts himself into the equation and begins to hint at Hank’s terrible secrets, Hilda must decide what it is she’s come to Echo Park searching for . . . and whether her fascination with death is worth missing out on life.

Hilda is probably one of the best, most well thought out characters I have read about in a long time.  Hilda moves in with her aunt after her parents die in a car crash and she becomes obsessed with death, especially celebrities’ death.  Hilda travels to famous murder scenes, suicide locations and cemeteries to get close to those unfortunate events with her friend Benji.  Benji has his own secrets and you can tell he is quietly unravelling while Hilda tries to pull herself together.

Any person would be devastated after being in an auto accident, but Hilda should be especially devastated by this accident since she lost both of her parents just like Jayne Mansfield.  I suppose this sends her on her quest of celebrity death sites.  Hilda goes on the Graveline Tours (the author doesn’t specify this one by name, but I have been on it) and to Hollywood Forever to watch movies.  Along the way, Hilda and Benji meet Hank who is a war camp survivor and from him Hilda learns to live again among the living.  She also meets Jake who has a more positive outlook on life, but has dark secrets as well.

I really enjoyed this book and the dark areas Charles covers always have a ray of hope.  It is just wonderful to read about teens trying to get their lives on track when the chips aren’t stacked in their favor and they manage to do it anyway.  I did read this in one sitting and that just shows how nicely written this one is.  I can’t wait to read more from this author.