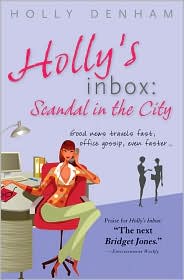 Praise for Holly’s Inbox
“The next Bridget Jones.”
-Entertainment Weekly
“Funny, captivating, and completely addictive.”
-Jill Mansell
“Email-tastic!”
-OK! Magazine
Dear Holly, isn’t it shocking…?
Things are finally going Holly Denham’s way: she’s in love, she’s getting the recognition she deserves at work, and her friends and family have graciously opted to avoid disaster for the moment.
Just when Holly is starting to settle into her new life, scandal erupts and Holly finds herself-and her in box-at the center of a gossip whirlwind that threatens everything she’s worked so hard for.
Written entirely in emails, this follow-up to the UK smash hit Holly’s Inbox will keep you glued to its pages as the scandal running rampant in the city threatens to ruin Holly’s hard-earned and long-awaited happiness.
“A very funny read [with] a marvelous twist at the end…”
-Romantic Times
“What a hoot. I started this book on a Sunday morning and by evening I had finished it. I couldn’t put it down.”
-Cheryl’s Book Nook
“A winner from first page to last.”
-The Romance Studio
(20100617)

Holly Denham is the pen name for Bill Surie, the owner of a placement service for receptionists and secretaries in London. He started the Holly’s Inbox website as a place to serialize his first novel, and it became an overnight sensation. He lives in Maida Vale, England.

I started out with Holly by getting the daily emails from the web site which was soon followed by the actual book, Holly’s Inbox

and now the latest installment Scandal in the City.  You will really feel like you stumbled upon someone laptop and you immediately start scrolling through their inbox.  And you can’t help yourself.  The story unfolds through these emails and detail Holly’s group of friends, including Jason, Trisha, Aisha, Marie, and Claire, her questionable boyfriend, Toby and her bosses.

Like a series of “found” emails you may lose bits and pieces of the story since there is little emotional inflections that come across in emails and not even a few emoticons to help sort through the conversations.  Also, instead of the characters actually having conversations, you get to peek into their inboxes as well.  Nicely done!  This is the perfect book for the voyeur in you, and you know everyone wants to read someone else’s mail.  You will adore this if you like Bridget Jones’ Diary.