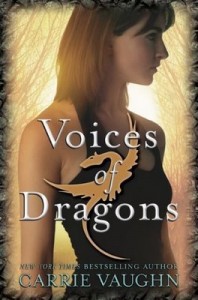 On one side of the border lies the modern world: the internet, homecoming dances, cell phones. On the other side dwell the ancient monsters who spark humanity’s deepest fears: dragons.
Seventeen-year-old Kay Wyatt knows she’s breaking the law by rock climbing near the border, but she’d rather have an adventure than follow the rules. When the dragon Artegal unexpectedly saves her life, the rules are abruptly shattered, and a secret friendship grows between them.
But suspicion and terror are the legacy of human and dragon inter­actions, and the fragile truce that has maintained peace between the species is unraveling. As tensions mount and battles begin, Kay and Artegal are caught in the middle. Can their friendship change the course of a war?
In her young-adult debut, New York Times bestselling author Carrie Vaughn presents a distinctly twenty-first-century tale of myths and machines, and an alliance that crosses a seemingly unbridgeable divide.

Carrie Vaughn survived her air force brat childhood and managed to put down roots in Colorado. Her first book, Kitty and the Midnight Hour, launched a popular series of novels about a werewolf named Kitty who hosts a talk-radio advice show. Ms. Vaughn has also written many short stories. This is her first work for young readers. Ms. Vaughn lives in Colorado.

Kay is your basic teenager who loves the outdoors and hiking, so it easy to believe that she is rescued one day by a dragon after the background is told.  This harks back to the age old story that those that are different are our enemies.  The dragons and humans have a tenuous treaty which the humans want to break to get at the natural reserves in the untouched dragon territory.  Once Kay starts to communicate with the dragon, Artegal, the book takes off.  Of course, the ending left off where there needs to be a sequel.  I just hope that I don’t have too wait to long.

I think this is one book that parents will be thrilled to have their kids read.  There are important lessons about getting along with those that are different, it touches on the importance of natural resources and the threat of war.  It has slight mentions of drinking and sex, but not more than anything you would watch on television.  Overall, this will appeal to those teens looking for a strong female leader.