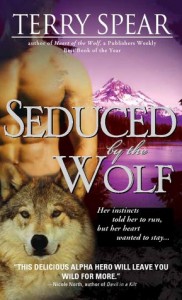 Praise for Terry Spear:
“The vulpine couple’s chemistry crackles off the page, but the real strength… lies in Spear’s depiction of pack power dynamics as well as in the details of human-wolf interaction. Her wolf world feels at once palpable and even plausible.”
-Publishers Weekly
“Chilling suspense and sizzling romance… The dark, sexy alpha hero will capture you-body, mind, and soul.”
–Nicole North, author of Devil in a Kilt
“If action, romance, and suspense are what you are looking for in a story, then look no further.”
-Night Owl Romance
His first priority is to protect his pack…
Werewolf pack leader Leidolf Wildhaven has just taken over a demoralized pack. With rogue wolves on the loose causing havoc and the authorities from the zoo suddenly zeroing in on the local wolf population, the last thing he needs in his territory is a do-gooder female, no matter how beautiful and enticing she is…
She’ll do anything to help wolves…
Biologist Cassie Roux has dedicated her life to protecting wolves in the wild. On a desperate mission to help a she-wolf with newborn pups, the last thing Cassie needs right now is a nosy and entirely too attractive werewolf pack leader trying to track her down…
With rogue wolves and hunters threatening at every turn, Cassie and Leidolf may find their attraction the most dangerous force of all…
(20100706)

A retired lieutenant colonel in the U.S. Army Reserves, Terry Spear has an MBA from Monmouth College. An eclectic writer, she dabbles in the paranormal as well as writing historical and true life stories for both teen and adult audiences. Spear lives in Crawford, Texas.

LOVED IT by Cathy

Cassie is a rare Royal red werewolf hiding in plain site as a wolf biologist dedicated to saving the real wolves by educating the public. Leidolf is now alpha of a dysfunctional werewolf pack. He has no time to go looking let alone court the needed alpha female, but when she comes into his territory he is not letting her get away.
Cassie has lost her trust and holds on tight to her “mission” of saving the real wolves, one at a time if necessary. Even as Leidolf  pack tries every thing to keep her for Leidolf it is Leidolf who will have to compromise if he wants to win her for life. Alphas don’t really know that word, but hey he is learning new behavior every day with dysfunctional werewolves.
As author Terry spear takes you through her world of wolf behavior and how it works in this Paranormal Romance, hang on for the ride. Each character has a story to reveal and getting them out into the open is an adventure though the Portland woods.While you are going through the loss, fear, love and hate with each new twist let us not forget the chase, we are after all following wolves! But who are we chasing? Cassie, the real wolf, zoo keepers, a lost biologist, pack members run amok, a mysterious new red female or killers? You’ll have to read it to find out who gets caught and why. Have fun I did!