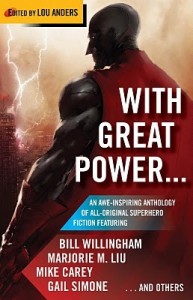 WELCOME TO THE SECOND “GOLDEN AGE” OF SUPERHEROES AND HEROINES Superheroes have come a long way since the “Man of Steel” was introduced in 1938. This brilliant new collection features original stories and novellas from some of today’s most exciting voices in comics, science fiction, and fantasy. Each marvelously inventive tale shows us just how far our classic crusaders have evolved—and how the greatest of heroes are, much like ourselves, all too human.
In “Call Her Savage,” MARJORIE M. LIU enters the dark heart of a fierce mythic heroine who is forced, by war, to live up to her own terrible legend.
In “A to Z in the Ultimate Big Company Superhero Universe (Villains Too),” BILL WILLINGHAM presents a fully-realized vision of a universe where epic feats and tragic flaws have transformed the human race.
In “Vacuum Lad,” STEPHEN BAXTER unveils the secret origins of the first true child of the space age—and disproves the theory that “nothing exists in a vacuum.”
In “Head Cases,” PETER DAVID and KATHLEEN DAVID blast through the blogosphere to expose the secret longings of a Lonely Superhero Wife.
In “The Non-Event,” MIKE CAREY removes the gag order on a super-thief named Lockjaw . . . and pries out a confession of life-altering events.
Also includes stories by Mike Baron • Mark Chadbourn • Paul Cornell • Daryl Gregory • Joseph Mallozzi • James Maxey • Ian McDonald • Chris Roberson • Gail Simone • Matthew Sturges . . . and an introduction by Lou Anders, “one of the brightest and best of the new generation of science fiction editors” (Jonathan Strahan, The Best Science Fiction and Fantasy of the Year).

A 2008/2007 Hugo Award nominee, 2007 Chesley Award nominee and 2006 World Fantasy Award nominee, Lou Anders is the editorial director of Prometheus Books’ science fiction imprint Pyr, as well as the editor of anthologies Fast Forward 2 (Pyr, October 2008), Sideways in Crime (Solaris, June 2008), Fast Forward 1(Pyr, February 2007), FutureShocks (Roc, January 2006), Projections: Science Fiction in Literature & Film (MonkeyBrain, December 2004), Live Without a Net (Roc, 2003), and Outside the Box (Wildside Press, 2001). In 2000, he served as the Executive Editor of Bookface.com, and before that he worked as the Los Angeles Liaison for Titan Publishing Group. He is the author of The Making of Star Trek: First Contact, and has published over 500 articles in various publications.

This is a really fun read and perfect for summer when novels can be overwhelming.  You can pick this up and read a story in an hour, put it down and then read another one.  The short stories of this anthology are all based on super heroes of some sort.  I have to say my absolute favorite one is Head Cases by Peter David and Kathleen David.  The story revolves around a group of friends that meet in a bar and all have some sort of super power.  It is just a perfect take on young adult angst and how even having a super power can be a cross to bear.