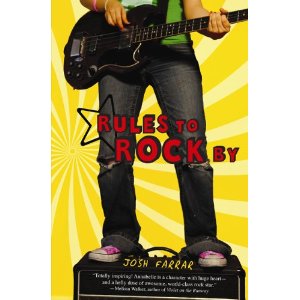 You’d never guess it now, but Annabelle Cabrera used to be a rock star. And not like her mom or dad called her a “total rock star” after she won a spelling bee or something. She was a real rock star, the bassist of Egg Mountain, the most popular band in the New York music scene. But when her parents uproot her from Brooklyn and move her to Rhode Island so they can record their own album, Annabelle feels lost. Starting a new band isn’t as easy as she’d hoped, the school’s rival band is a bunch of bullies, and her parents are so immersed in recording that they’re completely neglecting Annabelle and her younger brother. How can Annabelle truly make herself heard?

Josh Farrar is a writer and musician. He has written over 200 songs, but Rules to Rock By is his first book. Josh drew on his own experience playing in bands as a teenager, but he was equally inspired by such contemporary indie-teen bands as Care Bears on Fire, Smoosh, and Tiny Masters of Today. Josh has collaborated with the Creative Arts Program in Brooklyn to record demos of up-and-coming tween bands, as well as with the Willie Mae Rock Camp to develop scholarships for future rockers. Josh lives in Brooklyn, NY.

This book is almost pitch perfect.  The story line of Annabelle, tween rocker, is a perfect mix of music and word.  This should engage that hard to reach target of 10-12 year-olds and especially reluctant readers.  I think even their hipster parents will be peeking at the pages of this one.  Annabelle finds herself ripped from her hip and happening life and shoved into fending for herself at the age of twelve.  She finds herself trapped between wanting to be a child and having to be a grown up since her parents are not parenting her.  This part of the story is more reality than you might think.  There are a lot of kids pushed into this role as after school care and family support becomes extinct.

Farrar really nailed the voice of Annabelle and how she is trying to do her best, but is really just a kid.  I would love to see this story continued.  The only flat point for me in the whole book was that the bullying portion was glossed over.  I think that arc was necessary for the story to be resolved, but it would have been nice to see the parents actually more involved in resolving it.  Then again, sometimes parents aren’t paying attention.