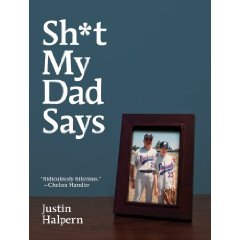 After being dumped by his longtime girlfriend, twenty-eight-year-old Justin Halpern found himself living at home with his seventy-three-year-old dad. Sam Halpern, who is “like Socrates, but angrier, and with worse hair,” has never minced words, and when Justin moved back home, he began to record all the ridiculous things his dad said to him:

More than a million people now follow Mr. Halpern’s philosophical musings on Twitter, and in this book, his son weaves a brilliantly funny, touching coming-of-age memoir around the best of his quotes. An all-American story that unfolds on the Little League field, in Denny’s, during excruciating family road trips, and, most frequently, in the Halperns’ kitchen over bowls of Grape-Nuts, Sh*t My Dad Says is a chaotic, hilarious, true portrait of a father-son relationship from a major new comic voice.

Justin Halpern is the founding editor of the comedy website HolyTaco.com and a senior writer at Maxim.com. Halpern created the Twitter page “Shit My Dad Says,” which boasts more than a million followers, and is cowriting and coproducing a sitcom adaptation for CBS. He splits his time between Los Angeles and his parents’ home in San Diego.

This book is for anyone who is related to or has a relationship with someone who says the first thing that comes to mind.  It is also truly touching.  I laughed and then got a little misty at how much the father and son relationship speaks about one that is truly built on love.  I am not saying that it isn’t a strange relationship, but that is what makes it so funny.  I think a television show based on this short book will be one to watch.