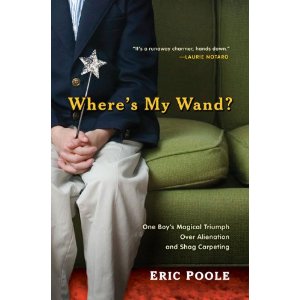 Augusten Burroughs, David Sedaris, and David Rakoff have all produced winning memoirs of their demented, alternately heartrending and sidesplitting late- twentieth-century American childhoods. Now, first-time author Eric Poole joins their ranks with his chronicle of a childhood gone hilariously and heartbreakingly awry in the Midwest of the 1970s. From the age of eight through early adolescence, Poole sought refuge from his obsessive-compulsive mother, sadistic teachers, and sneering schoolyard thugs in the Scotchgarded basement of his family’s suburban St. Louis tract house. There, emulating his favorite TV character, Endora from Bewitched, he wrapped himself in a makeshift caftan and cast magical spells in an effort to maintain control over the rapidly shifting ground beneath his feet. But when a series of tragic events tested Eric’s longstanding belief that magic can vanquish evil, he began to question the efficacy of his incantations, embarking on a spiritual journey that led him to discover the magic that comes only from within.

Eric Poole is the secret love child of Fran Lebowitz and David Sedaris. But oddly taller. A VP of radio marketing for a major media company, he resides in Los Angeles with his partner of eight years.

This book is a gem!  What a wonderful memoir, much in the spirit of Augusten Burroughs and  David Sedaris, this book takes you right to the heart of the 70’s.  I laughed out loud quite a bit while reading this and even thought the author had a tough time of it growing up, his spirit never seemed to diminish.  Imagine growing up with an obsessive mother with a cleaning bug that goes beyond normal.  Eric learns to cope with this as well as a hearing loss in one ear and figuring out that he is really gay.  This was truly a pleasure to read.