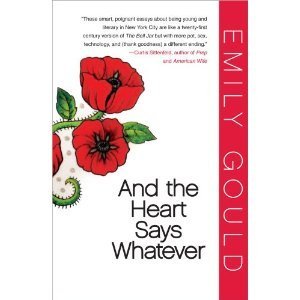 Essays by former editor of Gawker.com—and the new female voice of her generation.  In And the Heart Says Whatever, Emily Gould tells the truth about becoming an adult in New York City in the first decade of the twenty-first century, alongside bartenders, bounty hunters, bloggers, bohemians, socialites, and bankers. These are essays about failing at pet parenthood, suspending lust during the long moment in which a dude selects the perfect soundtrack from his iTunes library, and leaving one life behind to begin a new one (but still taking the G train back to visit the old one sometimes).   For everyone who has ever had a job she wishes she didn’t, felt inchoate ambition sour into resentment, ended a relationship, regretted a decision, or told a secret to exactly the wrong person, these stories will be achingly familiar.   At once a road map of what not to do and a document of what’s possible, this book heralds the arrival of a writer who decodes the new challenges of our post-private lives, and the age-old intricacies of the human heart.

Emily Gould is the former co-editor of Gawker.com, along with co-editor Alex Balk, managing editor Choire Sicha, and associate editor Doree Shafrir. She grew up in Silver Spring, Maryland and attended college for two years at Kenyon College before transferring to Eugene Lang College in New York City.
Gould resides in Brooklyn, New York. She began her blogging career as one-half of The Universal Review before starting her own blog, Emily Magazine, and writing for Gawker on a freelance basis as the anonymous author of the Unsolicited column. She eventually replaced Jessica Coen at Gawker upon Coen’s departure for Vanity Fair in September 2006. Before joining the Gawker staff, she was an associate editor at Disney’s Hyperion imprint.
Gould, with Zareen Jaffery, is the co-author of the young adult novel Hex Education, which was released by Penguin’s Razorbill imprint in May 2007.
On November 30, 2007 Gould resigned from Gawker.
www.emilymagazine.com

I will never be a writer.  I don’t have the ability to expose myself the way Emily Gould has in this series of essays about her life and the publishing world.  I had heard of Gawker.com but never actually read anything there unless it was forwarded to me and in a way, I am really glad I didn’t know anything about Emily Gould’s writing or life.  This short book of essays really exemplifies the state of the single in NYC and how difficult it is to grow up these days.  I think everyone has had a job that they hate or makes them stressful and Gould does a great job bringing those emotions and the effect they can have on your general like.  I hope that she has found some peace.