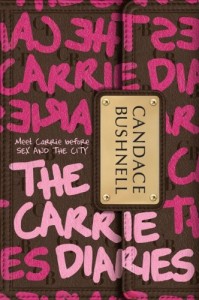 The Carrie Diaries is the coming-of-age story of one of the most iconic characters of our generation.

Before Sex and the City, Carrie Bradshaw was a small-town girl who knew she wanted more. She’s ready for real life to start, but first she must navigate her senior year of high school. Up until now, Carrie and her friends have been inseparable. Then Sebastian Kydd comes into the picture, and a friend’s betrayal makes her question everything.
With an unforgettable cast of characters, The Carrie Diaries is the story of how a regular girl learns to think for herself and evolves into a sharp, insightful writer. Readers will learn about her family background, how she found her writing voice, and the indelible impression her early friendships and relationships left on her. Through adventures both audacious and poignant, we’ll see what brings Carrie to her beloved New York City, where her new life begins.

Candace Bushnell is the critically acclaimed bestselling author of Sex and The City, Lipstick Jungle, One Fifth Avenue, 4 Blondes, and Trading Up, which have sold millions of copies. Sex and The City was the basis for the HBO hit show and film of the same name. Lipstick Jungle became a popular television show on NBC. Candace lives in New York City.

This book is directed at young adults, but to me it is really more of an adult book, or the teen needs to be really mature to read this.  The story goes back in time to Carrie Bradshaw’s roots back in the 70’s.  I guess her behavior was pretty typical during that era with lots of alcohol, random sex and some drugs.  I supposed the sound track of the book is the rock and roll part.  The descriptions of Carrie’s wardrobe are spectacular.  I just thought the story was a little bit drawn out and very introspective.  I dunno — I am a huge fan of Bushnell’s writing but never got into the TV show, so maybe this book isn’t directed at me.