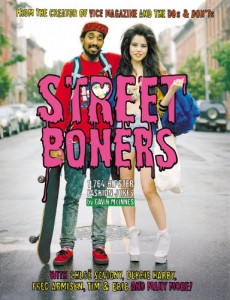 Fifteen years after founding Vice, Gavin McInnes has poured his creative juices into a new endeavor: StreetCarnage.com. Growing in size and influence at an alarming rate, the site’s main feature is the new and improved version of Gavin’s “DOs and DON’Ts,” now tantalizingly called Street Boners.

These Boners have been polished and compounded into a book that takes the best of the site and adds hundreds more gems! With 1,312 photos, hilarious captions, and a harsh new rating system-from one to 10 kitten faces-STREET BONERS makes sure no glorious fashion statement goes unnoticed. Innocent citizens are either damned to hell or relentlessly exalted into heaven. Chloe Sevigny, Debbie Harry, Fred Armisen, and Tim & Eric also contribute their scathing wit to the book, and the end result is a New York fashion bible no bathroom should be without.

Gavin McInnes co-founded Vice magazinein 1994, and later authored two successful books with the Vice brand–Vice Dos and Don’ts and The Vice Guide to Sex, Drugs and Rock and Roll. After splitting from Vice in 2007 due to creative differences, McInnes co-founded the company Street Carnage. McInnes has also published eight issues of a comic titled Pervert and played in a number of punk bands.

This book was such a hit with my son and all of his friends.  They are all in their early twenties, but I enjoyed it just as much.  I now regularly visit the author’s site for daily updates–there are actually some great posts there as well. Since the religion in this household is pretty much sarcasm, it is making a great addition to my son’s bathroom humor collection.  It is not a book to be taken seriously, so relax and page through this one.