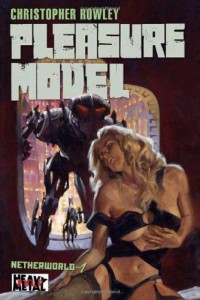 Description From GoodReads
Presenting Heavy Metal Pulp, a new line of novels combining noir fiction with fantastic art featuring the themes, story lines, and graphic styles of Heavy Metal magazine.
In Pleasure Model, the first book in the Netherworld trilogy, down-and out police detective Rook gets a big break when he’s assigned to a bizarre and vicious murder case. The clues are colder than the corpse and the case looks like it’ll remain unsolved—until an eyewitness is discovered. But the witness is a Pleasure Model, an illegal gene-grown human. Plesur’s only purpose is to provide satisfaction to her owner—in any way. When the murderer targets Plesur in order to eliminate the one witness, Rook takes her into hiding to protect her. Thus begins a descent into the dark world of exotic pleasure mods and their illicit buyers and manufacturers. Rook frantically looks for clues, struggling to stay one stop ahead of those looking to kill them both. But is Rook falling under Plesur’s spell….?

What a fun book!  This is really what the title declares it is:  Pulp Fiction.  Peasure Model  is an urban fantasy that the guys are going to eat up.  It was a quick read and there is sex, violence and drugs, no rock and roll though.  I am going to look for the next title in this series since the ending left me hanging a bit.  And isn’t that cover awesome since it reminds of something Quentin Tarantino would do.