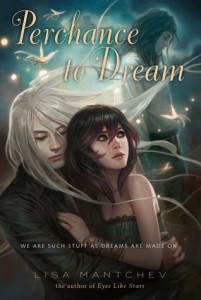 Description From GoodReads
The stuff that dreams are made on.

Act Two, Scene One
Growing up in the enchanted Thèâtre Illuminata, Beatrice Shakespeare Smith learned everything about every play ever written. She knew the Players and their parts, but she didn’t know that she, too, had magic. Now, she is the Mistress of Revels, the Teller of Tales, and determined to follow her stars. She is ready for the outside world.
Enter BERTIE AND COMPANY
But the outside world soon proves more topsy-turvy than any stage production. Bertie can make things happen by writing them, but outside the protective walls of the Thèâtre, nothing goes as planned. And her magic cannot help her make a decision between—
Nate: Her suave and swashbuckling pirate, now in mortal peril.
Ariel: A brooding, yet seductive, air spirit whose true motives remain unclear.
When Nate is kidnapped and taken prisoner by the Sea Goddess, only Bertie can free him. She and her fairy sidekicks embark on a journey aboard the Thèâtre’s caravan, using Bertie’s word magic to guide them. Along the way, they collect a sneak-thief, who has in his possession something most valuable, and meet The Mysterious Stranger, Bertie’s father—and the creator of the scrimshaw medallion. Bertie’s dreams are haunted by Nate, whose love for Bertie is keeping him alive, but in the daytime, it’s Ariel who is tantalizingly close, and the one she is falling for. Who does Bertie love the most? And will her magic be powerful enough to save her once she enters the Sea Goddess’s lair?
Once again, LISA MANTCHEV has spun a tale like no other—full of romance, magic, adventure, and fairies, too—that readers won’t want to put down, even after the curtain has closed.

About the Author
LISA MANTCHEV wrote her first play in fourth grade, and has been involved in the theater ever since. She lives with her husband, daughter, and their hairy miscreant dogs on the Olympic Peninsula of Washington State. Visit her online at http://www.theatre-illuminata.com/.

HMMM, Ariel or Nate? That is the question and it is answered in the follow up to Eyes Like Stars.   I loved the setting in the first book, but with the company now touring, it opens up a whole new can of worms.  Bertie is as magical and the fairies are as snarky as ever.  I am not going to reveal any of the details about the plot, but it is everything you want and need. The writing is so beautiful, I had to read this one twice in a row since I was afraid I would miss a detail.  I very rarely read a book again but this one is that special.