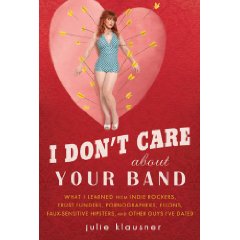 I Don’t Care About Your Band: What I Learned from Indie Rockers, Trust Funders, Pornographers, Felons, Faux-Sensitive Hipsters, and Other Guys I’ve Dated by Julie Klausner
LOVED IT
This book was an excellent way to finish the year.  If you like Jen Lancaster, Laurie Notaro or Chelsea Handler, this book should be at the top of your wish list.  It is truly laugh out loud funny and I found myself forcing my husband to listen while I read paragraphs to him.  OK, so maybe I am out of the demo for this book, but I could still relate.  I think any girl who has ever dated has had several of these guys someplace in their lives.
My favorite is the story about the vegan rocker from Seattle and the other indie musician from Brooklyn.  I think I have met both of those guys and done their laundry.  The book is just so full of sly observations that I can’t wait until Klausner has another book ready for me to read.  I am now following her blog to get something to hold me over.
Product Description

In the tradition of Cynthia Heimel and Chelsea Handler, and with the boisterous iconoclasm of Amy Sedaris, Julie Klausner’s candid and funny debut I Don’t Care About Your Band sheds light on the humiliations we endure to find love–and the lessons that can be culled from the wreckage.
I Don’t Care About Your Band posits that lately the worst guys to date are the ones who seem sensitive. It’s the jerks in nice guy clothing, not the players in Ed Hardy, who break the hearts of modern girls who grew up in the shadow of feminism, thinking they could have everything, but end up compromising constantly. The cowards, the kidults, the critics, and the contenders: these are the stars of Klausner’s memoir about how hard it is to find a man–good or otherwise–when you’re a cynical grown-up exiled in the dregs of Guyville.

Off the popularity of her New York Times “Modern Love” piece about getting the brush-off from an indie rock musician, I Don’t care About Your Band is marbled with the wry strains of Julie Klausner’s precocious curmudgeonry and brimming with truths that anyone who’s ever been on a date will relate to. Klausner is an expert at landing herself waist-deep in crazy, time and time again, in part because her experience as a comedy writer (Best Week Ever, TV Funhouse on SNL) and sketch comedian from NYC’s Upright Citizens Brigade fuels her philosophy of how any scene should unfold, which is, “What? That sounds crazy? Okay, I’ll do it.”
I Don’t Care About Your Band charts a distinctly human journey of a strong-willed but vulnerable protagonist who loves men like it’s her job, but who’s done with guys who know more about love songs than love. Klausner’s is a new outlook on dating in a time of pop culture obsession, and she spent her 20’s doing personal field research to back up her philosophies. This is the girl’s version of High Fidelity. By turns explicit, funny and moving, Klausner’s debut shows the evolution of a young woman who endured myriad encounters with the wrong guys, to emerge with real-world wisdom on matters of the heart. I Don’t Care About Your Band is Julie Klausner’s manifesto, and every one of us can relate.