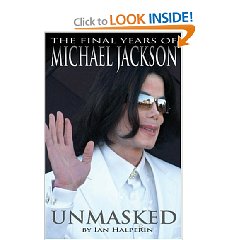 Unmasked: The Final Years of Michael Jackson by Ian Halperin
LIKED IT
I am such a sucker for tabloid-like books. This one was a quick read and bring forth some interesting facts that present some of the stories published by the media might be sensational.  Was Michael Jackson the victim of extortion or did he actually molest children?

There are a bit too many transcriptions of interviews and depositions taken by others and that really detracts from what the author writes.  He does present cases for both sides.  I think the ultimate message of the book is that Michael Jackson was really a disturbed person.

In late December 2008, Ian Halperin told the world that Michael Jackson had only six months to live. His investigations into Jackson’s failing health made headlines around the globe. Six months later, the King of Pop was dead.

Whatever the final autopsy results reveal, it was greed that killed Michael Jackson. Friends and associates paint a tragic picture of the last years and days of his life as Jackson made desperate attempts to prepare for the planned concert series at London’s 02 Arena in July 2009. These shows would have earned millions for the singer and his entourage, but he could never have completed them, not mentally, and not physically. Michael knew it and his advisors knew it. Anyone who caught even a fleeting glimpse of the frail old man hiding beneath the costumes and cosmetics would have understood that the London tour was madness. Why did it happen this way? After an intense five year investigation, New York Times bestselling author Ian Halperin uncovers the real story of Michael Jackson’s final years, a suspenseful and surprising thriller.

Ian Halperin is also a former winner of the Rolling Stone magazine Award for Investigative Journalism. He is the author or coauthor of five books, including the bestsellers Fire and Rain: The James Taylor Story, and Celine Dion: Behind the Fairytale, as well as a number of expos – s on the modeling industry. He coauthored Who Killed Kurt Cobain? with Max Wallace. Ian is a regular correspondent for Court TV and has contributed to 60 Minutes 2.