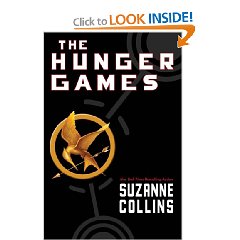 The Hunger Games by Suzanne Collins

This futuristic fantasy takes place in a post apocalyptic United States and is very fast paced.  I thought it was a little predictible and reminded me of a cross between The Lottery by Shirley Jackson and a teen Survivor.  Of course I had to go back to the library and get Catching Fire so I could read the next installment right away.

The characters are the true stars of this story.  I really liked Katniss, Gale and Peeta.  They all have enough detail to make them interesting.  I hope the next book will have more to say about Peeta and Gale.  I think this is appropriate for older teens since there is some violence, not much sex (a little kissing) and alcohol abuse.

Katniss is a 16-year-old girl living with her mother and younger sister in the poorest district of Panem, the remains of what used be the United States. Long ago the districts waged war on the Capitol and were defeated. As part of the surrender terms, each district agreed to send one boy and one girl to appear in an annual televised event called, “The Hunger Games.” The terrain, rules, and level of audience participation may change but one thing is constant: kill or be killed. When Kat’s sister is chosen by lottery, Kat steps up to go in her place.

About the Author
SUZANNE COLLINS’s debut novel, Gregor the Overlander, the first book in the Underland Chronicles, received wide praise both in the United States and abroad. The series has been a New York Times bestseller and received numerous accolades. Also a writer for childrenÂ’s television, Suzanne lives with her family in Connecticut.