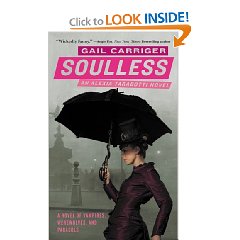 It is always interesting to read new genre’s and this one has it all.  A mix of humourous Victorian cozies and paranormal romance which equals Steampunk and turns out to be very addictive.   I love how the author weaves fantasy with the Victorian era.   The character of Alexia is a strong female lead and nicely develops into someone I want to keep an eye on.  Gosh, what can I say, but try this one!

Alexia Tarabotti is laboring under a great many social tribulations. First, she has no soul. Second, she’s a spinster whose father is both Italian and dead. Third, she was rudely attacked by a vampire, breaking all standards of social etiquette.

Where to go from there? From bad to worse apparently, for Alexia accidentally kills the vampire — and then the appalling Lord Maccon (loud, messy, gorgeous, and werewolf) is sent by Queen Victoria to investigate.

With unexpected vampires appearing and expected vampires disappearing, everyone seems to believe Alexia responsible. Can she figure out what is actually happening to London’s high society? Will her soulless ability to negate supernatural powers prove useful or just plain embarrassing? Finally, who is the real enemy, and do they have treacle tart?

SOULLESS is a comedy of manners set in Victorian London: full of werewolves, vampires, dirigibles, and tea-drinking.

About the Author
Ms. Carriger began writing in order to cope with being raised in obscurity by an expatriate Brit and an incurable curmudgeon. She escaped small town life and inadvertently acquired several degrees in Higher Learning. Ms. Carriger then traveled the historic cities of Europe, subsisting entirely on biscuits secreted in her handbag. She now resides in the Colonies, surrounded by a harem of Armenian lovers, where she insists on tea imported directly from London and cats that pee into toilets. She is fond of teeny tiny hats and tropical fruit. Find out more about the author at http://www.gailcarriger.com/.

OBTAINED FROM: A Friend