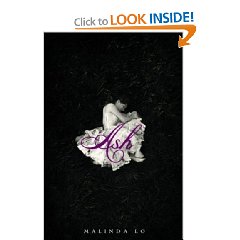 Ash by Malinda Lo
LOVED IT
This is truly a different version of Cinderella that is told with beautiful writing and distinctive dialogue. There is a definite twist to this story, as Aisling (ASH) has a fairy god father who is actually cursed to love her and Ash uses this fact to get what she wants. All of the other elements of the classic Cinderella story will be found here except that instead Ash doesn’t get the guy, but ends up with someone in the end after all. You will need to read the story to find out who she ends up with though.
I fell in love with the cover as it really shows how isolated Ash is and leads you to the story itself. There is a minimal sexual theme, but parents might need to have a frank discussion about where this books leads. I can’t imagine in this day and age anyone would have any problems with an alternative version of this classic tale.
Product Description
Cinderella retold. In the wake of her father’s death, Ash is left at the mercy of her cruel stepmother. Consumed with grief, her only joy comes by the light of the dying hearth fire, rereading the fairy tales her mother once told her. In her dreams, someday the fairies will steal her away, as they are said to do. When she meets the dark and dangerous fairy Sidhean, she believes that her wish may be granted.The day that Ash meets Kaisa, the King’s Huntress, her heart begins to change. Instead of chasing fairies, Ash learns to hunt with Kaisa. Though their friendship is as delicate as a new bloom, it reawakens Ash’s capacity for love-and her desire to live. But Sidhean has already claimed Ash for his own, and she must make a choice between fairy tale dreams and true love.Entrancing, empowering, and romantic, Ash is about the connection between life and love, and solitude and death, where transformation can come from even the deepest grief.
About the Author
Malinda Lo was born in China and moved to the United States as a child. She grew up in Colorado and has since lived in Boston, New York, London, Beijing, Los Angeles, and San Francisco. She is the former managing editor of AfterEllen.com, the largest entertainment news website for lesbians and bisexual women. In 2006, Malinda was awarded the Sarah Pettit Memorial Award for Excellence in LGBT Journalism by the National Gay and Lesbian Journalists Association. She is a graduate of Wellesley College and has master’s degrees from Harvard and Stanford universities.Malinda now lives in Northern California with her partner and their dog. Ash is her first novel. Her website is http://www.malindalo.com/.
Product Details
Reading level: Young Adult
Hardcover: 272 pages
Publisher: Little, Brown Books for Young Readers; 1 edition (September 1, 2009)
Language: English
ISBN-10: 0316040096
ISBN-13: 978-0316040099