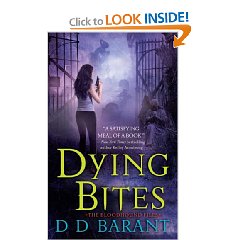 A wonderful debut of a new paranormal series that is full of snark! I love snark. This is probably more urban fantasy than romance with a great deal of action that won’t take you long to read this one. The world building for this series is quickly done and believable. Jace has quirks and I couldn’t imagine anyone saying half the things she does, but I wish I could say some of those lines. She has such a smart mouth it is surprising that she just isn’t killed for it, but then that is what makes this so much fun. I can’t wait to see what happens in the next one.

From the Back Cover
Introducing the bold new Bloodhound Files series—and a novel that will knock you out of this world…
Her job description is the “tracking and apprehension of mentally-fractured killers.” What this really means in FBI profiler Jace Valchek’s brave new world—one in which only one percent of the population is human—is that a woman’s work is never done. And real is getting stranger every day…
DYING BITES
Jace has been ripped from her reality by David Cassius, the vampire head of the NSA. He knows that she’s the best there in the business, and David needs her help in solving a series of gruesome murders of vampires and werewolves. David’s world—one that also includes lycanthropes and golems—is one with little knowledge of mental illness. An insane serial killer is a threat the NSA has no experience with. But Jace does. Stranded in a reality where Bela Lugosi is a bigger box office draw than Bruce Willis and every full moon is Mardi Gras, Jace must now hunt down a fellow human before he brings the entire planet to the brink of madness. Or she may never see her own world again…