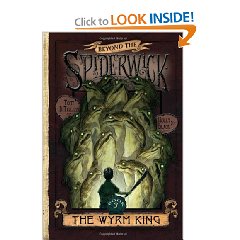 The Wyrm King (Beyond the Spiderwick Chronicles) by Holly Black and Tony DiTerlizzi
LOVED IT
Another series ends and I will miss this one. These books are so wonderful to read out loud as there is so much action with just the right amount of descriptions and great drawings to back it up. There are a few twists and turns on the way to the conclusion to keep older children interested. I highly recommend this series to everyone.
Product Description
In the final installment of Beyond the Spiderwick Chronicles, Nick and Laurie had thought they solved their giant problems when they drove all the giants into the sea. But now, the Grace kids have come back to tell them they may have more trouble coming their way!
It turns out the giants control the population of Hydra, a dragon like creature that is creating sinkholes all over Florida. But with the mermaids refusing to return the giants to the shore, the nixie’s still missing and the threat of a destroyed Florida drawing closer, the kids have to take matters in their own hands.
Will Nick and Laurie be able to stop the destruction they unwittingly caused? Can a new giant hunter help save the day? Can Arthur Spiderwick’s Field Guide help them out of this or are they on their own?
Find out in the final conclusion of the Spiderwick saga!

About the Authors
Holly Black spent her early years in a decaying Victorian mansion where her mother fed her a steady diet of ghost stories and books about faeries. Her first book, Tithe: A Modern Faerie Tale, was an ALA Top Ten Book for Teens, received starred reviews in Publishers Weekly and Kirkus Reviews, and has been translated into twelve languages. Her second teen novel, Valiant, was an ALA Best Book for Young Adults, a Locus Magazine Recommended Read, and a recipient of the Andre Norton Award from the Science Fiction and Fantasy Writers of America. She lives in Amherst, Massachusetts. Visit Holly at www.blackholly.com.

Tony DiTerlizzi is co-creator and illustrator of the bestselling Spiderwick Chronicles, the author and illustrator of Jimmy Zangwow’s Out-of-this-World MoonPie Adventure, as well as the Zena Sutherland Award winning Ted. In 2003, his brilliantly cinematic version of Mary Howitt’s classic The Spider and The Fly received stellar reviews, earned Tony his second Zena Sutherland Award, and was honored as a Caldecott Honor Book. Tony’s art has also graced the covers of such well-known fantasy writers as Peter S. Beagle, J. R. R. Tolkien, Anne McCaffrey, and Greg Bear. He has also made significant contributions to Dungeons and Dragons and Wizards of the Coast’s Magic; The Gathering. His first chapter book, Kenny & the Dragon, was published in August 2008 and debuted as a New York Times Best Seller. He lives with his wife, Angela and their daughter in Amherst, MA Visit Tony on the world wide web at diterlizzi.com.