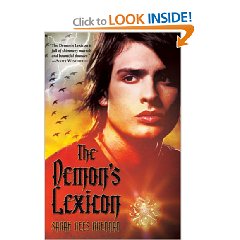 Product Description
Nick and his brother, Alan, have spent their lives on the run from magic. Their father was murdered, and their mother was driven mad by magicians and the demons who give them power. The magicians are hunting the Ryves family for a charm that Nick’s mother stole — a charm that keeps her alive — and they want it badly enough to kill again.
Danger draws even closer when a brother and sister come to the Ryves family for help. The boy wears a demon’s mark, a sign of death that almost nothing can erase…and when Alan also gets marked by a demon, Nick is des-perate to save him. The only way to do that is to kill one of the magicians they have been hiding from for so long.
Ensnared in a deadly game of cat and mouse, Nick starts to suspect that his brother is telling him lie after lie about their past. As the magicians’ Circle closes in on their family, Nick uncovers the secret that could destroy them all.
This is the Demon’s Lexicon. Turn the page.
About the Author
Sarah Rees Brennan was born and raised in Ireland by the sea, where her teachers valiantly tried to make her fluent in Irish (she wants you to know it’s not called Gaelic), but she chose to read books under her desk in class instead. After living briefly in New York and doing a creative writing MA and library work in Surrey, England, she has returned to Dublin, Ireland, to write. Her Irish is still woeful, but she feels the books under the desk were worth it. This is Sarah’s first novel. Visit her website at http://www.sarahreesbrennan.com/.
Product Details
Reading level: Young Adult
Hardcover: 336 pages
Publisher: Margaret K. McElderry; 1 edition (June 2, 2009)
Language: English
ISBN-10: 1416963790
ISBN-13: 978-1416963790
I love debuts and this was a really nice read. This is appropriate for younger teens as there is no sexual situations, alcohol/drug references that I remembered being too blatant. The dynamic of Nick and his brother Alan really create a good background for the story. There is a lot of action and it is nice to have a male point of view when so many of the paranormals seem to have female protagonists these days. The Demon’s Lexicon should have you staying up late to finish it. There is another one in the series to be released next year.