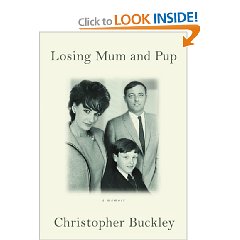 Losing Mum and Pup: A Memoir by Christopher Buckley
4 out of 5
Product Description
In twelve months between 2007 and 2008, Christopher Buckley coped with the passing of his father, William F. Buckley, the father of the modern conservative movement, and his mother, Patricia Taylor Buckley, one of New York’s most glamorous and colorful socialites. He was their only child and their relationship was close and complicated. Writes Buckley: “They were not – with respect to every other set of loving, wonderful parents in the world – your typical mom and dad.”As Buckley tells the story of their final year together, he takes readers on a surprisingly entertaining tour through hospitals, funeral homes, and memorial services, capturing the heartbreaking and disorienting feeling of becoming a 55-year-old orphan. Buckley maintains his sense of humor by recalling the words of Oscar Wilde: “To lose one parent may be regarded as a misfortune. To lose both looks like carelessness.”Just as Calvin Trillin and Joan Didion gave readers solace and insight into the experience of losing a spouse, Christopher Buckley offers consolation, wit, and warmth to those coping with the death of a parent, while telling a unique personal story of life with legends.
About the Author
Christopher Buckley is the author of fourteen books, including Supreme Courtship, Boomsday, and Thank You For Smoking. He is editor-at-large of ForbesLife magazine, and was awarded the Thurber Prize for American Humor and the Washington Irving Medal for Literary Excellence. He lives on the Acela train between Washington, D.C. and New York City.
Product Details
Hardcover: 272 pages
Publisher: Twelve (May 6, 2009)
Language: English
ISBN-10: 0446540943
ISBN-13: 978-0446540940
This is such a beautifully written book about losing your parents. I was never a fan of William F. Buckley’s politics, but you have to admire his writing ability and his son Christopher does a wonderful job in eulogizing both his parents in this easy to read book. Christopher Buckley is one writer I enjoy immensely and I try to read everything he publishes, so this was a must read for me. I did have to look up several words in this one, so it was educational as well.