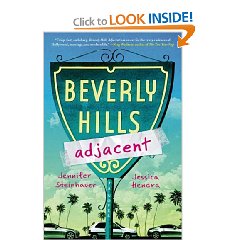 Beverly Hills Adjacent by Jennifer Steinhauer Jessica Hendra
3 out of 5
Product Description
During pilot season, June Dietz’s husband Mitch Gold becomes another man—a man who doesn’t notice her delicious Farmers Market homemade dinners, who mumbles responses around the tooth-whitening trays in his mouth, who is consumed with envy for his fellow television actors, who pants for a return phone call from his agent. And who wants to be married to an abject, paranoid, oblivious mess? Possibly not June, whose job as a poetry professor at UCLA makes her in but not of Los Angeles, with its illogical pecking order and relentless tribal customs. Even their daughter Nora’s allegedly innocent world isn’t immune from one upsmanship: while Mitch is bested for acting jobs by the casually confident (and so very L.A.) Willie Dermot, June is tormented by Willie’s insufferably uptight wife Larissa and the other stay-at-home exercisers in the preschool.
Could Rich Friend be the answer? Smart, age-appropriate, bookish—and a wildly successful television producer—Rich focuses on June the way nobody has since she moved to Los Angeles, and there’s nothing for June to do but wallow in what she’s been missing. But what’s the next step? How does a regular person decide between husband and lover, family and fantasy?
Set in a Los Angeles you haven’t read about before, Beverly Hills Adjacent is that rare thing: a laugh-out-loud novel with heart.
About the Author
JENNIFER STEINHAUER is the Los Angeles bureau chief of The New York Times, where she began working as a copygirl in college. Her reporting on Hurricane Katrina won the Newswoman’s Club of New York Front Page Deadline Reporting Award in 2006. JESSICA HENDRA is the author of How to Cook Your Daughter: A Memoir. She is married to a working television actor. Beverly Hills Adjacent is the first fiction for each. They live in the real west L.A., in Rancho Park.
Product Details
Hardcover: 320 pages
Publisher: St. Martin’s Press; 1 edition (May 12, 2009)
Language: English
ISBN-10: 0312551827
ISBN-13: 978-0312551827
I had high hopes for this book of Hollywood insider dirt, but it just fell flat. I am sure that this satrical look at Hollywood is spot on with the characters, but I just didn’t like them. The charm that most actors have just didn’t come through with Mitch. His wife June was just sad in the fact that she never realizes people are just using her. There were several plot points that I had problems with like June not realizing one of her students had plagerized several papers. Most universities use sites like TurnItIn.com to verify works against any copying.