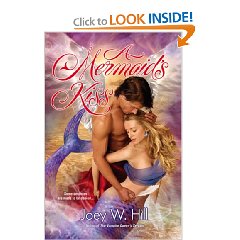 A Mermaid’s Kiss (Berkley Sensation) by Joey W. Hill
3 out of 5
Product Description
National bestselling author Joey W. Hill “stands out in a genre known for its out-of-the- ordinary love play.”(The Romance Studio)The angelic Jonah has been battling the Dark Ones for centuries. But his noble spirit has begun to tire with the weight of war—allowing a Dark One to strike a blow that severs his wings and knocks him into the sea.Anna is a Daughter of Arianne—a direct descendant of the mermaid of legend. Anna’s longing for love compels her to risk her very life to protect and hide the fallen Jonah. And the longer Jonah delays his return to the heavens, the more Anna’s secret passions are tempted.But as she falls more in love with him, Anna wonders if she’s destined to lose her heart and her dreams to save Jonah’s soul…
About the Author
Joey W. Hill has written numerous titles for Ellora’s Cave, which have won many awards, nominations, and five-star reviews from erotic romance review sites. She is also a Romance & Beyond magazine Grand Prize winner.
Product Details
Paperback: 384 pages
Publisher: Berkley Trade (November 4, 2008)
Language: English
ISBN-10: 0425223809
ISBN-13: 978-0425223802
I really wanted to like this story but it fell flat in a few places for me. Based on The Little Mermaid by Hans Christian Andersen, it replaced the prince with an angel named Jonah and was as dark as the original was meant to be before it was Disneyfied. I just don’t know where this story was going. The minor plot points were at times more interesting than Anna and Jonah. I do enjoy some erotic writing, but this seems to push the envelope a little too much where the story takes a backseat to the sex.