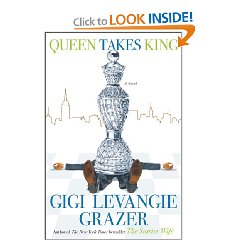 Jackson Power. A name like the man himself: aggressive, ambitious, bullish. The prodigal son, heir to millions, built his own Manhattan real estate empire and revels in seeing his moniker — Power! — on glittering skyscrapers around the city that never sleeps. Beneath his desk in the towering Power headquarters, Jacks has a stack of newspapers and photographs of himself, shaking hands with the most famous men and women of his generation. Here’s a man who’s always loved to see his name in ink. Until now.
Cynthia Hunsaker Power. She is the epitome of elegance and society. The perfect foil for a man of Jacks’s stature — his first and only wife, he’d proudly tell any of his Master of the Universe (read: Gargoyle) friends. The former prima ballerina arrived in New York at eighteen, off the bus from Missouri, brimming with talent, beauty, and drive. She met a struggling painter, fell in love, and only later learned she’d won the Power lottery. Now she sits on the New York Ballet Theater board, effortlessly outdoing herself with one gala after another. But the press coverage of the Power silver anniversary party at the Waldorf takes the cake.
Jacks Power appears twice in the New York Post the next morning — once gallantly dancing with his wife of twenty-five years, Cynthia; and once hand in hand with Lara Sizemore, morning television star, exiting her Upper West Side apartment building that very same night.
To Jackson Power, Lara is everything his wife Cynthia is not — wild, voluptuous, mysterious, and self-sustaining. A new passion has swept Jacks off his well-shoed feet — and she is Lara Sizemore. He is ready for the divorce, ready to marry his mistress, America’s Sweetheart. But Cynthia isn’t ready to be swept out of the picture quite so easily.
Let the Divorce Games begin.
Whether they’re changing the locks on each other in their Park Avenue triplex or sabotaging each other’s dinner parties, it’s The People’s Billionaire vs. The Ballerina, in a split-up that will trump the most scandalous divorces known to polite New York society. Cynthia’s got their twenty-five-year-old artist daughter, Vivienne, in her camp; Jacks has the young bartending playwright Adrian, whom he intends to pay to seduce Cynthia into an easy split. But Cynthia might have a few tricks up her well-tailored Chanel sleeve, and she — like Jacks — is prepared to use every weapon in her divorce arsenal to win the game. It’s a battle of wits, of charm, of two of the biggest egos — and personalities and bank accounts — in Manhattan, and neither side will go down without a fight.
From beloved and best selling author Gigi Levangie Grazer comes a sexy, sassy, smart new novel, Queen Takes King.

Gigi Levangie Grazer is the author of three prior novels: Rescue Me (2000), Maneater (2003), and The Starter Wife (2006). The Starter Wife was adapted for an Emmy Award?winning USA Network miniseries starring Debra Messing, and later for a television series; Maneater was adapted for a Lifetime miniseries starring Sarah Chalke in May 2009. In addition, Gigi wrote the screenplay for Stepmom, starring Julia Roberts and Susan Sarandon. Gigi’s articles have appeared in Vogue, Harper’s Bazaar, and Glamour. She lives in L.A. with her two children and three miniature dachshunds.

This is the perfect book to sit in the shade and read this summer. Juicy NYC rich elite lifestyle tidbits are mixed in with a nice rich character for a change. Queen Takes King was such a nice change of pace that stories are now geared toward older chick lit lovers like me. I thought a lot of the plot seemed to reflect the Trump divorce but maybe that is because I am on the west coast and don’t hear much about the high profile divorce cases that go on there. I am sure there is a lot of dirt to go around.