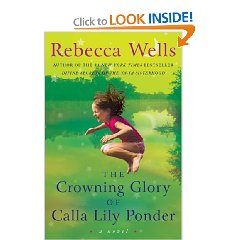 The Crowning Glory of Calla Lily Ponder: A Novel by Rebecca Wells
4 out of 5
Product Description
Known for her beloved Ya-Ya books (Divine Secrets of the Ya-Ya Sisterhood, Little Altars Everywhere, and Ya-Yas in Bloom), Rebecca Wells has helped women name, claim, and celebrate their shared sisterhood for over a decade. Divine Secrets of the Ya-Ya Sisterhood held the top of the New York Times bestseller list for sixty-eight weeks, became a knockout feature film, sold more than 5 million copies, and inspired the creation of Ya-Ya clubs worldwide.
Now Wells debuts an entirely new cast of characters in this shining stand-alone novel about the pull of first love, the power of life, and the human heart’s vast capacity for healing.
The Crowning Glory of Calla Lily Ponder is the sweet, sexy, funny journey of Calla Lily’s life set in Wells’s expanding fictional Louisiana landscape. In the small river town of La Luna, Calla bursts into being, a force of nature as luminous as the flower she is named for. Under the loving light of the Moon Lady, the feminine force that will guide and protect her throughout her life, Calla enjoys a blissful childhood—until it is cut short. Her mother, M’Dear, a woman of rapture and love, teaches Calla compassion, and passes on to her the art of healing through the humble womanly art of “fixing hair.” At her mother’s side, Calla further learns that this same touch of hands on the human body can quiet her own soul. It is also on the banks of the La Luna River that Calla encounters sweet, succulent first love, with a boy named Tuck.
But when Tuck leaves Calla with a broken heart, she transforms hurt into inspiration and heads for the wild and colorful city of New Orleans to study at L’AcadÉmie de BeautÉ de Crescent. In that extravagant big river city, she finds her destiny—and comes to understand fully the power of her “healing hands” to change lives and soothe pain, including her own. When Tuck reappears years later, he presents her with an offer that is colored by the memories of lost love. But who knows how Calla Lily, a “daughter of the Moon Lady,” will respond?
A tale of family and friendship, tragedy and triumph, loss and love, The Crowning Glory of Calla Lily Ponder features the warmth, humor, soul, and wonder that have made Wells one of today’s most cherished writers, and gives us an unforgettable new heroine to treasure.
About the Author
Rebecca Wells is a novelist, actor, and playwright. She is the author of the New York Times bestsellers Ya-Yas in Bloom, Little Altars Everywhere (winner of the Western States Book Award), and Divine Secrets of the Ya-Ya Sisterhood (winner of the American Booksellers Book of the Year Award, short-listed for the Orange Prize), which was made into a feature film. She performs from her work internationally, and her books have been translated into twenty-three languages. A native of Louisiana, she now makes her home on an island in Puget Sound, Washington, with her husband, their spaniel, and three sheep.
Product Details
Hardcover: 416 pages
Publisher: Harper (July 7, 2009)
Language: English
ISBN-10: 0060175311
ISBN-13: 978-0060175313
This is one of those books with a predictable plot, but the pleasure is in the way it is written. It is a typical boy and girl meet, lose each other, then find one another again. The beauty of the words make the whole thing totally unpredictable though and should be read for just that reason.