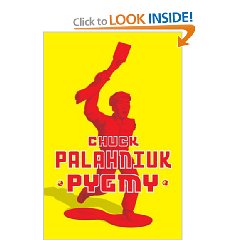 Product Description
The Manchurian Candidate meets South Park—Chuck Palahniuk’s finest novel since the generation-defining Fight Club.“Begins here first account of operative me, agent number 67 on arrival Midwestern American airport greater _____ area. Flight _____. Date _____. Priority mission top success to complete. Code name: Operation Havoc.”Thus speaks Pygmy, one of a handful of young adults from a totalitarian state sent to the United States, disguised as exchange students, to live with typical American families and blend in, all the while planning an unspecified act of massive terrorism. Palahniuk depicts Midwestern life through the eyes of this thoroughly indoctrinated little killer, who hates us with a passion, in this cunning double-edged satire of an American xenophobia that might, in fact, be completely justified. For Pygmy and his fellow operatives are cooking up something big, something truly awful, that will bring this big dumb country and its fat dumb inhabitants to their knees.It’s a comedy. And a romance.

I was warned about this book and almost didn’t finish it. The author tries to write the whole book without the word “the” being used when the protagonist speaks. Other characters use the word but with great restraint. I almost couldn’t read it due to the graphic nature of certain scenes and don’t think I could recommend this book to anyone except those that like the truly bizaare.