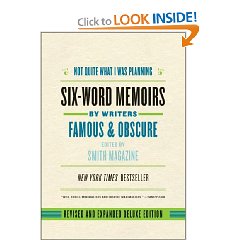 Not Quite What I Was Planning, Revised and Expanded Deluxe Edition: Six-Word Memoirs by Writers Famous and Obscure by Larry Smith & Rachel Fershleiser
4 out of 5
Product Description
Deceptively simple and surprisingly addictive, Not Quite What I Was Planning is a thousand glimpses of humanity—six words at a time.
When Ernest Hemingway famously wrote, “For Sale: baby shoes, never worn,” he proved that an entire story can be told using a half-dozen words. When the online storytelling magazine SMITH asked readers to submit six-word memoirs, they proved a whole, real life can be told this way, too. The results are fascinating, hilarious, shocking, and moving.
From small sagas of bittersweet romance (“Found true love, married someone else”) to proud achievements and stinging regrets (“After Harvard, had baby with crackhead”), these terse true tales relate the diversity of human experience in tasty bite-size pieces.
The original edition of Not Quite What I Was Planning spent six weeks on the New York Times bestseller list, and thanks to massive media attention—from NPR to the The New Yorker—the six-word memoir concept spread to classrooms, dinner tables, churches, synagogues, and tens of thousands of blogs. This deluxe edition has been revised and expanded to include more than sixty never-before-seen memoirs.
From authors Elizabeth Gilbert, Richard Ford, and Joyce Carol Oates to celebrities Stephen Colbert, Mario Batali, and Joan Rivers to ordinary folks around the world, everyone has a six-word story to tell.
I picked this up at the library not realizing I had already read the first version. I don’t remember half the quotes in this new edition, so it seemed like they added a lot to it. This is very fun and quick and will have you trying to think up your own six word memoir.
Product Details
Hardcover: 256 pages
Publisher: Harper (October 21, 2008)
Language: English
ISBN-10: 0061713716
ISBN-13: 978-0061713712