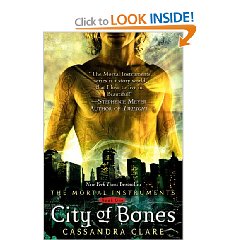 City of Bones (Mortal Instruments) by Cassandra Clare
5 out of 5
Product Description
Their hidden world is about to be revealed….
When fifteen-year-old Clary Fray heads out to the Pandemonium Club in New York City, she hardly expects to witness a murder — much less a murder committed by three teenagers covered with strange tattoos and brandishing bizarre weapons. Clary knows she should call the police, but it’s hard to explain a murder when the body disappears into thin air and the murderers are invisible to everyone but Clary.
Equally startled by her ability to see them, the murderers explain themselves as Shadowhunters: a secret tribe of warriors dedicated to ridding the earth of demons. Within twenty-four hours, Clary’s mother disappears and Clary herself is almost killed by a grotesque demon. But why would demons be interested in ordinary mundanes like Clary and her mother? And how did Clary suddenly get the Sight? The Shadowhunters would like to know….
About the Author: Cassandra Clare worked for several years as an entertainment journalist for the Hollywood Reporter before turning her attention to fiction. The Mortal Instruments trilogy has been on many bestseller lists. Cassandra lives in Brooklyn. Visit her website at cassandraclare.com. Learn more about The Mortal Instruments trilogy at mortalinstruments.com. Learn about her new trilogy The Infernal Devices at theinfernaldevices.com.
This book had all of my favorite elements. It was fast paced, snappy dialogue and characters that are well rounded. Also, it was not overly descriptive, which for a book of almost 500 pages, is just amazing. This is a great summer read for anyone who likes urban fantasy and wants to escape to an alternate world. This book just flew by and I had to go back to the library to get the second one, City of Ashes.
Product Details
Reading level: Young Adult
Hardcover: 496 pages
Publisher: Margaret K. McElderry (March 27, 2007)
Language: English
ISBN-10: 1416914285
ISBN-13: 978-1416914280