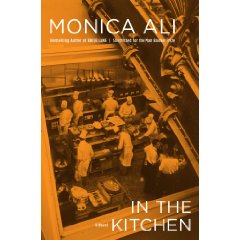 In the Kitchen: A Novel by Monica Ali

Gabriel L ightfoot is an enterprising man from a northern E ngland mill town, making good in London. As executive chef at the once-splendid Imperial H otel, he is trying to run a tight kitchen. But his integrity, to say nothing of his sanity, is under constant challenge from the competing demands of an exuberant multinational staff, a gimlet-eyed hotel management, and business partners with whom he is secretly planning a move to a restaurant of his own. D espite the pressures, all his hard work looks set to pay off.
Until a worker is found dead in the kitchen’s basement. It is a small death, a lonely death — but it is enough to disturb the tenuous balance of Gabe’s life.
Elsewhere, Gabriel faces other complications. His father is dying of cancer, his girlfriend wants more from their relationship, and the restaurant manager appears to be running an illegal business under Gabe’s nose.
Enter Lena, an eerily attractive young woman with mysterious ties to the dead man. Under her spell, Gabe makes a decision, the consequences of which strip him naked and change the course of the life he knows — and the future he thought he wanted.

I really had to struggle to finish this book. The writing and descriptions are extremely well done, but I am not a descriptive type person. I just wished the book had moved quicker and there wasn’t so much detail.