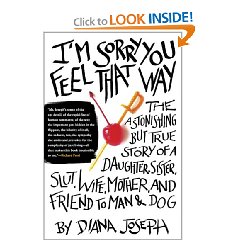 I’m Sorry You Feel That Way: The Astonishing but True Story of a Daughter, Sister, Slut, Wife, Mother, and Friend to Man and Dog by Diana Joseph
4 out of 5

Meet the men in Diana Joseph’s life: “The boy,” Diana’s fourteen-year-old son, who supports the NRA and dreams of living in a house with wall-to-wall carpeting; Diana’s father, who’s called her on the telephone twice, ever, and who sat her down when she was twelve to caution her against becoming a slut (she didn’t listen); Diana’s brothers, or, as her father calls them, “the two assholes”; Diana’s ex-husband, a lumberjack with three ex-wives, yet he’s still the first one she calls when she’s in a jam; and Diana’s common-law husband, Al, an English professor who’s been mistakenly called mentally challenged. Ostensibly organized around the various men in Diana’s life, this is really a memoir about what it’s like to be a modern, smart woman making her way in the world.

This is one of those books that make your life seem normal. The author manages to tell her story without making you feel sorry for her even though she has a tough life. Parts were just really funny and I almost felt guilty laughing about them only to realize that was the point. If you can’t laugh at life, you cry.