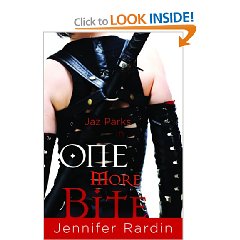 One More Bite (Jaz Parks, Book 5) by Jennifer Rardin
5 out of 5
Product Details
Paperback: 336 pages
Publisher: Orbit; 1 edition (January 5, 2009)
Language: English
ISBN-10: 0316022098
ISBN-13: 978-0316022095
Product Description
It’s Jaz Parks. I’ve already smoked the guy who was the pain in the CIA’s you-know-what for the past few years. But now, in the power vacuum left by the death of Edward “The Raptor”Samos, a struggle for supremacy has begun between his former allies. The CIA feels the balance must be maintained. So when an agent planted among the Weres discovers a plot to assassinate the Coven’s leader, my vampire boss and I are brought in to take out the woman hired to do the deed, a killer who might be as wily and Gifted as ourselves.So it’s off to the Scottish Highlands for some twisted fun among murderers, demons and half-crazed relatives. Sometimes being a top-secret CIA assassin isn’t all it’s cracked up to be.
If I could ever choose to become a character in a book for a day, I would pick Jaz Parks. I just love the fact that she is so human, yet has supernatural powers. This latest installlment had me laughing and turning the pages to get to the end. The only problem is that the story ended, but at least I know there is another one to be released. (finished 5/14/09)