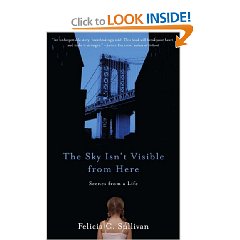 The Sky Isn’t Visible from Here: Scenes from a Life by Felicia C. Sullivan
4 out of 5
From the Inside Flap
Felicia Sullivan’s mother disappeared on the night Sullivan graduated from college and has not been seen or heard from in the ten years since. Sullivan, who grew up on the tough streets of Brooklyn in the 1980s, now looks back on her childhood—lived among drug dealers, users, substitute fathers, and a host of unsavory characters. Ever the responsible child, Sullivan became her mother’s keeper, taking her to the hospital when she overdoses, withstanding her narcissistic rages, succumbing to the abuse or indifference of so-called stepfathers, and always wondering why her mother would never reveal the truth about the father she’d never met. But then, Sullivan’s volatile, beautiful, deceitful, drug-addicted mother altered the truth in many cruel ways.Ashamed of her past, Sullivan invented a persona to show the world. But keeping up a facade has its price, and before she knew it, she, too, was snorting coke in nightclubs, throwing back shots of tequila like candy, and eventually taking a leave of absence from her Ivy League graduate program. In fact, she had become her mother. A book about secrets and forgiveness, The Sky Isn’t Visible from Here is also the story of a young woman unraveling—and then putting her life back together again.
This was a wonderfully written memoir that is both sad and hopeful at the same time. I only wish there was another chapter detailing what the author did with her life at the end of the book.