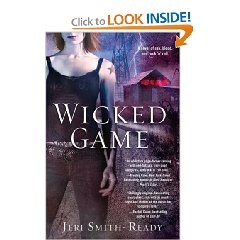 Wicked Game by Jeri Smith-Ready
4 out of 5
Product Description
Late-night radio you can sink your teeth into….
Recovering con artist Ciara Griffin is trying to live the straight life, even if it means finding a (shudder!) real job. She takes an internship at a local radio station, whose late-night time-warp format features 1940s blues, 60s psychedelia, 80s Goth, and more, all with an uncannily authentic flair. Ciara soon discovers how the DJs maintain their cred: they’re vampires, stuck forever in the eras in which they were turned.
Ciara’s first instinct, as always, is to cut and run. But communications giant Skywave wants to buy WMMP and turn it into just another hit-playing clone. Without the station–and the link it provides to their original Life Times–the vampires would “fade,” becoming little more than mindless ghosts of the past. Suddenly a routine corporate takeover becomes a matter of life and un-death.
To boost ratings and save the lives of her strange new friends, Ciara re-brands the station as “WVMP, the Lifeblood of Rock ‘n’ Roll.” In the ultimate con, she hides the DJs’ vampire nature in plain sight, disguising the bloody truth as a marketing gimmick. WVMP becomes the hottest thing around–next to Ciara’s complicated affair with grunge vamp Shane McAllister. But the “gimmick” enrages a posse of ancient and powerful vampires who aren’t so eager to be brought into the light. Soon the stakes are higher–and the perils graver–than any con game Ciara’s ever played….
Great story about Vampires and a Radio station, WVMP (of course!). This looks like it will be a nice series. There are a few threads hanging from this one that need tying up. Ciara, a con artist trying to go good, by helping vampires stay sane. If you liked Carrie Vaughn’s Kitty series, you will enjoy this one as well.