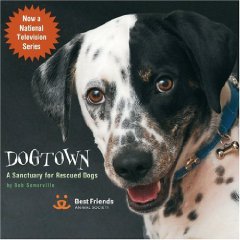 Dogtown: A Sanctuary for Rescued Dogs by Bob Somerville
5 out of 5
Product Description
This inspiring new book gives readers an inside look at the dogs who are rescued and rehabilitated by Best Friends Animal Society at Dogtown, part of the largest no-kill animal haven in the United States. This sanctuary hosts hundreds of dogs from around the world (including 22 pit bulls who were rescued from their painful lives with Michael Vick), as well as cats, horses, guinea pigs, rabbits, goats, and various other animals – between 1,500-2,000 animals in all. Dogtown is the subject of a television series on the National Geographic Channel; new episodes will begin September 5, 2008. Like the TV show, Dogtown depicts the engrossing stories of the dogs that are rescued and rehabilitated at the facility by its top-notch staff of veterinarians and trainers. Readers will learn about the relationships that flourish between the dogs and the trainers, and see how happy endings are possible for these dogs.
About the Author
Best Friends Animal Society is a non-profit, tax-exempt charity that was started by Michael Mountain and a group of friends, who sought to create a no-kill haven for rescued animals. The pilot program expanded and Best Friends was established in the early 1980s. They have great success in rescuing and rehabilitating animals and finding homes for them. The sanctuary is located at Angel Canyon in Southern Utah, a 3,700 acre ranch at the heart of the famous Golden Circle of national parks, close to Zion National Park, the Grand Canyon s North Rim, Bryce Canyon, and Lake Powell. A wide range of animals, including dogs, cats, birds, horses, rabbits, goats, and farm animals are cared for at Best Friends Animal Sanctuary. The organization reaches across the nation, helping groups, individual people, and entire communities to set up spay/neuter, shelter, foster, and adoption programs in their own neighborhoods, cities and states.
This is a lovey book about rescue dogs and has sections that cover the rehabilitation of MIchael Vick’s pit bulls and the rescue of dogs from New Orleans after Katrina. The pictures are gorgeous and the work this rescue group does is amazing