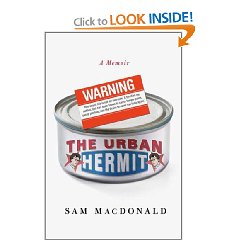 The Urban Hermit by Sam Macdonald

Product Description
Faced with the truth that his debts and his waistline had both ballooned out of control, Sam MacDonald devised a plan to change his life.
When Sam graduated from Yale in 1995, he watched a classmate make inroads as a head-office guy in professional baseball, another become a day-trading millionaire, and another develop connections at the Playboy Mansion. Struggling to make ends meet, he shrugged his shoulders at their success and raised a tall one to them.
It wasn’t until April 2000 that Sam got his wake-up call. He weighed 340 lbs. He was flat broke. And the IRS had caught up with him.
In a desperate attempt to save himself, Sam decided to limit himself to a budget of $8 a week and 800 calories a day. He called it “The Urban Hermit Plan.”
He thought he would do it for a month. Instead, he embarked on a bizarre year-long journey. He lost 160 pounds in the process, befriended rent-dodging trailer-park denizens, flew to Bosnia on assignment, traveled to a peace festival in a hippie van, had a run-in with Cooter from the Dukes of Hazzard, and met the woman who would later become his wife.
The Urban Hermit is a wildly hilarious story about backwoods living, as told by a man who should have known better.

A very charming book about living within your means and realizing what is important in life. I highly recommend this one.